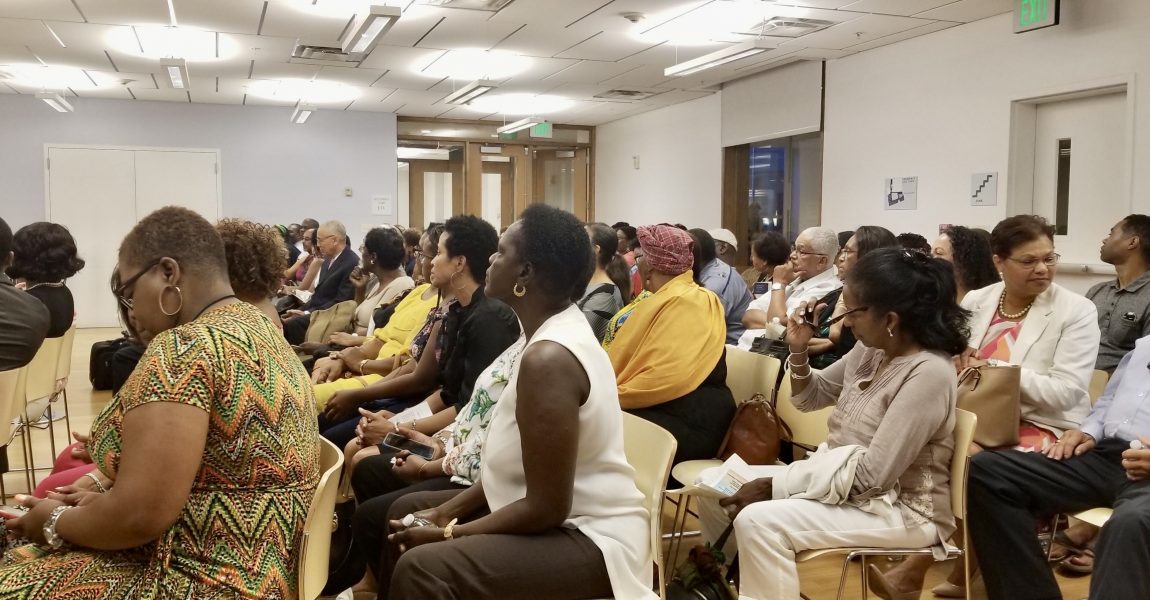 From Emancipation to Caribbean Independence

From Emancipation to Caribbean Independence

The Caribbean Research & Policy Center (CRPC) organized a Symposium attended by some 100 members of the Caribbean Community of the DMV area (Washington DC, Maryland and Virginia), to listen to a Lecture “From Emancipation to Caribbean Independence” in Silver Spring, Maryland on the evening of Aug. 1 st . Members of the Caribbean Diaspora were taken on an awesome journey through  the history of Caribbean peoples by widely recognized historian and an expert on Caribbean and African diaspora history Dr. Franklin W. Knight (Leonard and Helen R Stulman Professor Emeritus and Academic Professor, John Hopkins University). The Lecture, which was in honor of Sen. Shirley Nathan-Pulliam, was themed “Together, we proudly celebrate our Caribbean Heritage”, and was staged on Caribbean Emancipation Day to celebrate the journey of Caribbean peoples from 1838 to the present.

The event was also timed to mark the historic recognition of Caribbean people in the State of Maryland with August being established by law and proclaimed by Governor Larry Hogan, Jr., as “Caribbean Heritage Month in the State of Maryland”.   The Bill to make this possible was initiated, introduced, and piloted in the Maryland Senate by Sen. Shirley Nathan-Pulliam, co- sponsored and assisted by Senator Arthur Ellis (born in Portland, Jamaica). In the Maryland House of Delegates, the Bill was sponsored and piloted by Del. Regina Boyce (of Jamaican and Barbadian descent), ably assisted by her Caribbean colleagues in the House, Del. Gabriel Acevero (Trinidad born), Del. Jenelle Wilkins (Jamaican born), and Del. Joseline Peña-Melnyk (Dominican Republic born).

Senate Bill 472, as enacted into law, specifically states: “The Governor shall proclaim the Month of August as Caribbean Heritage Month in recognition of the contributions that Caribbean Americans have made to the state.” Also, “the Proclamation shall urge educational and cultural organizations to observe Caribbean Heritage Month properly with appropriate programs, ceremonies, and activities.”

The Governor’s Proclamation which was read and presented by Sen. Nathan-Pulliam read: “Maryland is proud to be home to a substantially growing number of Caribbean Americans (who) have greatly enriched Maryland’s cultural diversity, are very beneficial to its economy, and have contributed to our proud heritage.” The Governor’s Proclamation also stated that “The economic, social, cultural and historical contributions of Caribbean Americans should be honored; and Maryland is proud to commemorate the heritage and tremendous contributions made to our state and nation throughout history by Caribbean Americans.”

Dr. Knight’s lecture kept the packed room in rapt attention and concluded with a number of quite profound and mind-opening observations. These were:

Dr. Knight concluded by sharing with the audience, what he said was his “firm belief”, that “Such an ambitious, creative, confident, dynamic, hardworking, heroic, and longsuffering people represent the best candidates for inclusion in any decent society anywhere. They highly deserve the significant recognition extended by the State of Maryland….”

Following Dr. Knight’s lecture, Sen. Nathan-Pulliam was presented with a photograph of the official signing ceremony by Mrs. Sonia Ward on behalf of the sponsoring organizations. Sen. Nathan-Pulliam then presented an Official Citation to Dr. Knight in part recognition of his contribution to the inaugural Caribbean lecture series.

Sen. Ellis then read and presented an Official Citation from the Maryland General Assembly, signed by Sen. Nathan-Pulliam, to Ambassador Curtis Ward in recognition of his “Unparalleled and extensive knowledge and experience as a world statesman, demonstrating outstanding leadership and vision, serving in numerous capacities in Jamaican and Caribbean diaspora organizations in the United States.”

The Lecture was sponsored and organized by the Caribbean Research &amp; Policy Center (CRPC), in collaboration with the Caribbean American Advisory Group of Montgomery County Maryland (CAAG), and the Caribbean-American Political Action Committee (C-PAC). Welcoming remarks were given by Mrs. Venice Mundle-Harvey (Chair of CAAG), Dr. Knight was introduced by Mr. Chris Gardiner (C-PAC), and the vote of thanks were given by Ms. Derrice Deane (Co-chair of CAAG and Producer/Host of CaribNation TV); Ambassador Curtis Ward (CRPC) opened the event with brief remarks in which special guests were recognized.