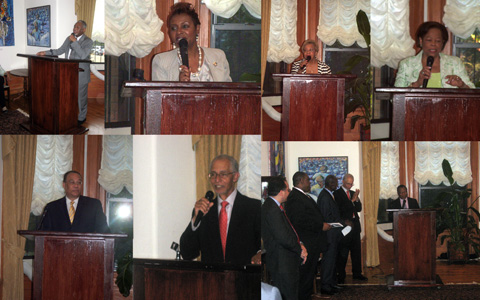 The official launch of the Caribbean Research & Policy Center (CRPC) was hosted at the Embassy of Trinidad and Tobago by Her Excellency Glenda Morean-Phillip, Ambassador of Trinidad and Tobago on June 17, 2010. In welcoming the gathering, Ambassador Morean-Phillip drew attention to the importance of the occasion, and assured the gathering that her government was fully supportive of the CRPC.

In his opening remarks, CRPC Chairman Ambassador Curtis Ward informed the gathering of the origin, purpose, and importance of establishing a Caribbean think tank in Washington DC, and thanked all those who had contributed to the realization of this historic event within the Caribbean diaspora community in the United States. He noted that the CRPC would be a source for Caribbean perspectives, filling the information gap for policy- and decision-makers in Washington and the Caribbean. He expressed appreciation to members of the Caribbean diplomatic corps for their support, and to those private sector entities that had contributed to the staging of the event.

Other speakers toasting the occasion included Ambassador Albert Ramdin, Assistant Secretary General of the Organization of American States; Ambassador Dr. Richard Bernal, Executive Director at the Inter-American Development Bank; Hon. Yvette D. Clarke, Member of the U.S. House of Representatives; Dr. Edward Green, Assistant Secretary General of CARICOM; and Hon. Shirley Nathan-Pulliam, Member of the Maryland House of Delegates.  A statement from the Hon. P. J. Patterson, former Prime Minister of Jamaica, who was expecting to be present but had a flight delay in Miami, was read.

Over the period June 17 – 19, 2007 a Conference on the Caribbean involving representatives from Governments, Private Sector and the Caribbean Diaspora was held in Washington, D.C.  This event lent substance to the statement made by the then-Chairman of CARICOM, Most Honorable Percival Patterson, on October 2, 2003 that:

“I bring you the clear message that the West Indian Diaspora Communities are within the demographic and cultural boundaries of CARICOM.  We want to have overseas West Indians fully engaged with the rest of us in consolidating Caribbean regional integration.”

At the final session of the Diaspora Forum which was held within that Conference I was afforded the honour and pleasure of speaking on behalf of the CARICOM Heads of Government.  In that capacity, in my summation, I indicated approval of three recommendations which had emanated from the Caribbean Diaspora:

The National Coalition on Caribbean Affairs (NCOCA) assumed responsibility for implementing the first recommendation, and thanks in large measure to the efforts and contributions of Ambassador Curtis Ward and his supporters, together with the full cooperation of the Caucus of Caribbean Ambassadors, we have gathered this evening to witness and participate in this historic launching of the Caribbean Research & Policy Center.

Once again, CARICOM thanks you for this momentous contribution dedicated to informing and promoting harmonious, peaceful and mutually beneficial relations between the United States of America and the Caribbean Region.

Long may we benefit from the cooperative efforts of the Caribbean Diaspora.