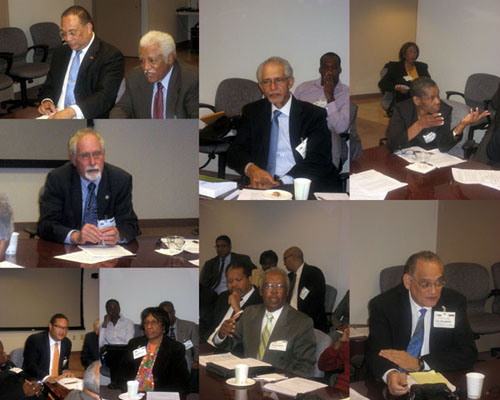 Symposium on “Financial Sector Reform in the Caribbean”

The CRPC Roundtable discussion on “Financial Sector Reform in the Caribbean” brought together a number of Caribbean diaspora economists, international financial institution expertise, banking experts and others with years of experience in national, regional and international financial sectors, as well as from academia and the private sector. The participants were welcomed to the symposium at the IDB venue by CRPC Chairman, Ambassador Curtis Ward.

Internationally acclaimed financial sector economist, Sir Courtney N. Blackman, PhD, prepared an Issue Paper for the CRPC which he presented to the symposium to provide the basis for the discussions. Sir Courtney is a former Governor of the Bank of Barbados and former Barbados Ambassador to the United States and Permanent Representative to the Organization of American States, and author of the book “The Practice of Economic Management: a Caribbean Perspective” [Ian Randle Press, 2006].

In his presentation, Sir Courtney highlighted weaknesses in the financial systems of Caribbean countries and offered recommendations for reform. A number of Sir Courtney’s observations and recommendations, as well as the weaknesses and vulnerability to external shocks, which were identified in his Issue Paper, were supported by a number of discussants who offered their own experiences working in and with Caribbean national and international financial institutions (IFIs). The general consensus was that, in order to reduce risks to the Caribbean financial sector,  there was an urgent need for reform, and that reforms should be a priority  for Caribbean governments and private sector financial entities.